The Food and Drink in History team pick some of their highlights from the collection. 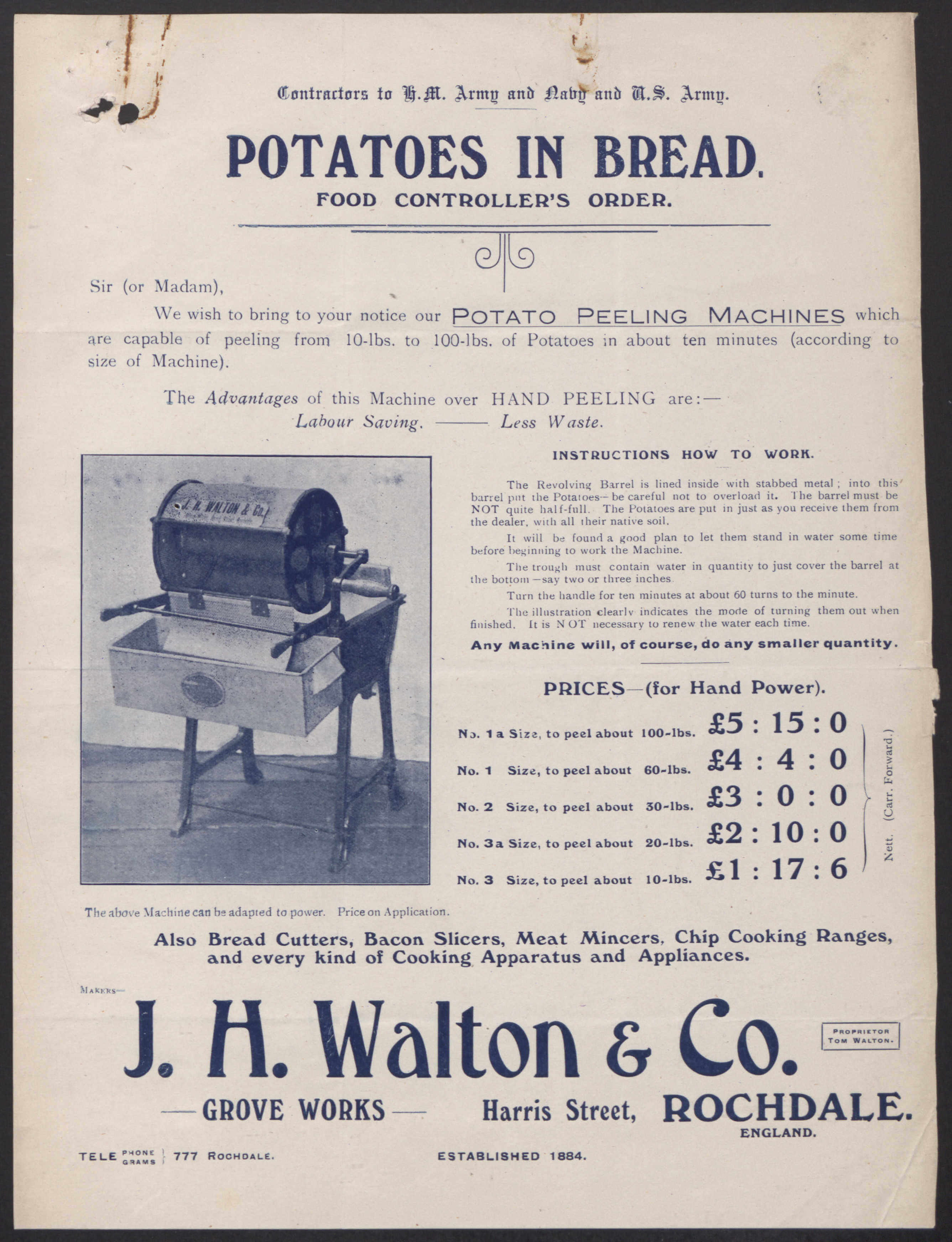 So many of the documents in this resource celebrate the endless possibilities of food and drink, and therefore hold at their centre the notion of food as always plentiful, dependable, and part of daily life. What happens, then, when food becomes scarce? The WWI Food Governance and Rationing collection from The National Archives provides a fascinating insight into the government's response when food supplies began to dwindle as the war advanced. The Memoranda on National Rationing by the Food Controller explains how and why compulsory rationing was introduced in 1918, stating that "the Food Controller was the Nation's housekeeper at a time when the National larder was considerably under-stocked, and he had to try to make things go round". It explains the logistics behind rationing, lessons learnt from other nations' past methods of controlling food and how the British government's strategy evolved over time, from first being "faced with the phenomenon of the queue" to the post-war period. Other documents in the collection show how the government negotiated the challenges of ensuring equal supplies of food across the country to meet different needs – supplying Kosher food to Jewish populations, higher quantities of food to manual labourers, specific foodstuffs for invalids, adequate milk supplies to children and mothers and comparing the nutritional value of Allied soldiers' rations to those of the Central Powers.

Different documents elaborate on schemes to control the production and equal distribution of key commodities – bread, sugar, meat, butter, cheese and, of course, tea. A selection of government documents and reports detail the development and implementation of the ‘Potatoes in Bread' campaign, which hoped to preserve cereal stocks by encouraging bakers to incorporate mashed potato into their bread. Potatoes: baking tests with the addition of 5% potatoes to flour contains different recipe experiments with remarks on how the potato content impacted the final loaf, and Bread (Use of Potatoes) Order, 1918 details the government's attempt to make the substitution compulsory.

With correspondence between government officials, reports, meetings of minutes and ration books, the collection provides a unique insight into the impact of global politics and conflict on the production, distribution and consumption of food in the United Kingdom and abroad, and into the "extraordinarily successful effort" of the "Nation's housekeeper" to negotiate the crisis and supply the population with food in wartime.

"Ten Nights In A Bar Room": Prohibition and Temperance 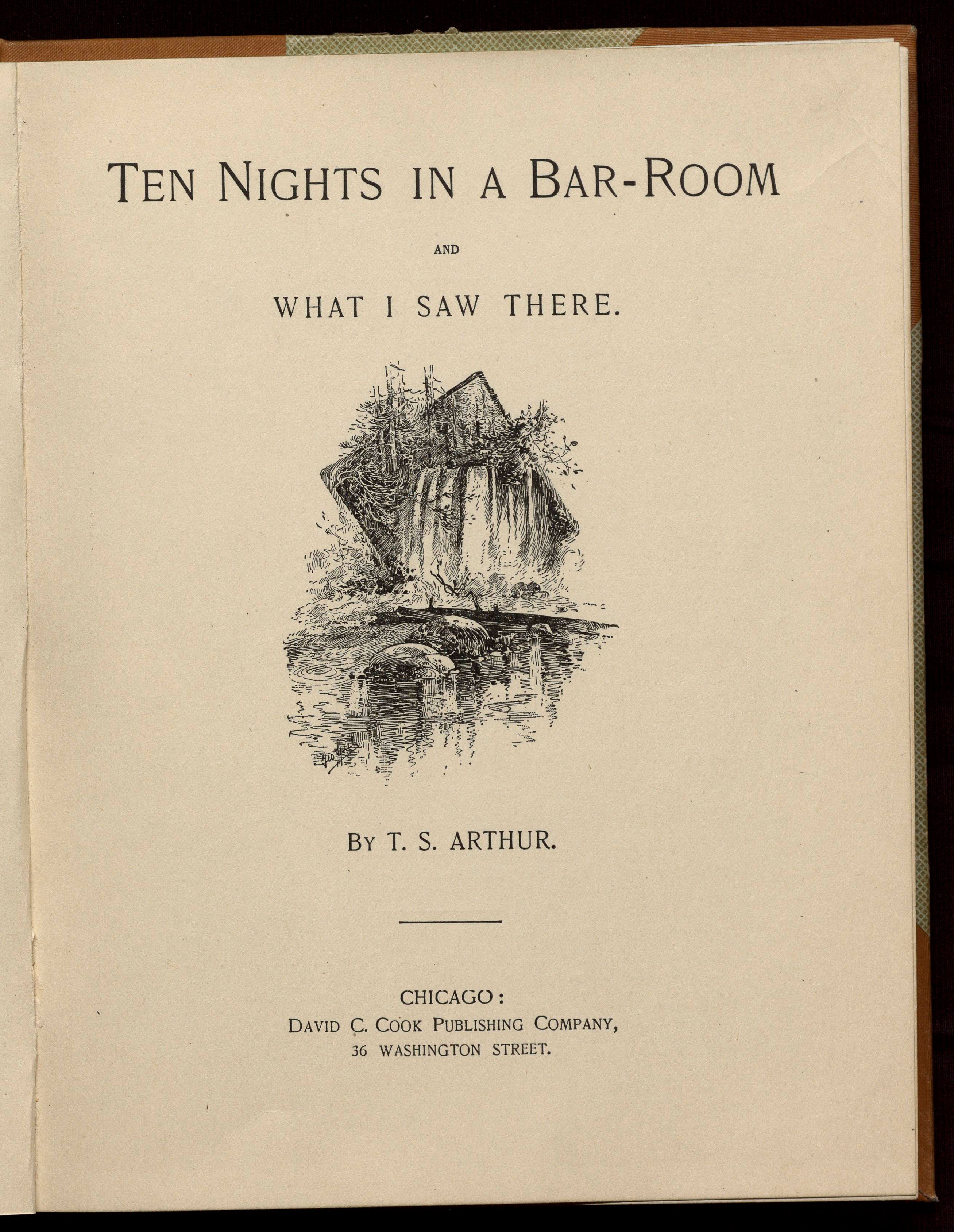 Food and Drink in History contains a wealth of items relating to alcohol, encompassing not only its production and consumption but also its regulation in the form of the temperance movement and prohibition. One of the more unusual of these items is Timothy Shay Arthur's Ten Nights in a Bar Room and What I Saw There, arguably the best known and certainly one of the more dramatic temperance novels. Among the many fascinating documents from the University of Michigan is an early edition of this work containing a number of original and striking illustrations. The novel is an intriguing example of the 'Cult of Domesticity'; the prevailing moral value system of the upper and middle classes during the nineteenth century in the United States and United Kingdom. Concern over excessive alcohol consumption began in the United States during the colonial era. As everyday drinking increased in the 1800s, the temperance movement, spearheaded by religious Protestant groups, gathered steam but was halted by the Civil War. In the 1870s however, it returned with a vengeance and developed into a major reform movement. Timothy Shay Arthur's novel became a powerful and popular piece of pro-temperance propaganda.

The novel tells the story of the unnamed narrator who, across a number of years, spends ten nights in the 'Sickle and Sheaf' in Cedarville. Here, he witnesses the slow ruin of a number of characters, culminating in the death of the Landlord, Simon Slade, at the hands of his son, Frank. In typical melodramatic fashion, the novel features a slew of villainous characters, no more so than the evil Harvey Green who uses alcohol and gambling to corrupt the young and promising Willy Hammond. The novel also includes several heart-breaking moments, such as when a drunken man is confronted by his daughter begging him to go home and later on when that same child is hit by a thrown glass. The narrator acts as the moral voice, soliloquising on the dangers of drinking and possible solutions. Ultimately, in the novel's closing chapters, the town turns on the 'Sickle and Sheaf' and a series of resolutions result in the destruction of all alcohol on the premises.

Extremely popular upon release, Ten Nights in a Bar Room was adapted for the stage in 1858 (a mere four years after its initial publication) and proved an extremely popular form of pro-prohibition propaganda. It was adapted for the screen several times including in 1910, 1913 and 1921 but most famously in 1931, as a notorious "pre-code" film. Ten Nights in a Bar Room is a fascinating example of the kind of temperance and prohibition-based material released during this period, one of many examples included within Food and Drink in History.

Amy Hubbard
"The object, then, is not only to live, but to live economically, agreeably, tastefully, and well. Accordingly, the art of cookery commences" (p39, Book of Household Management [Part I]) 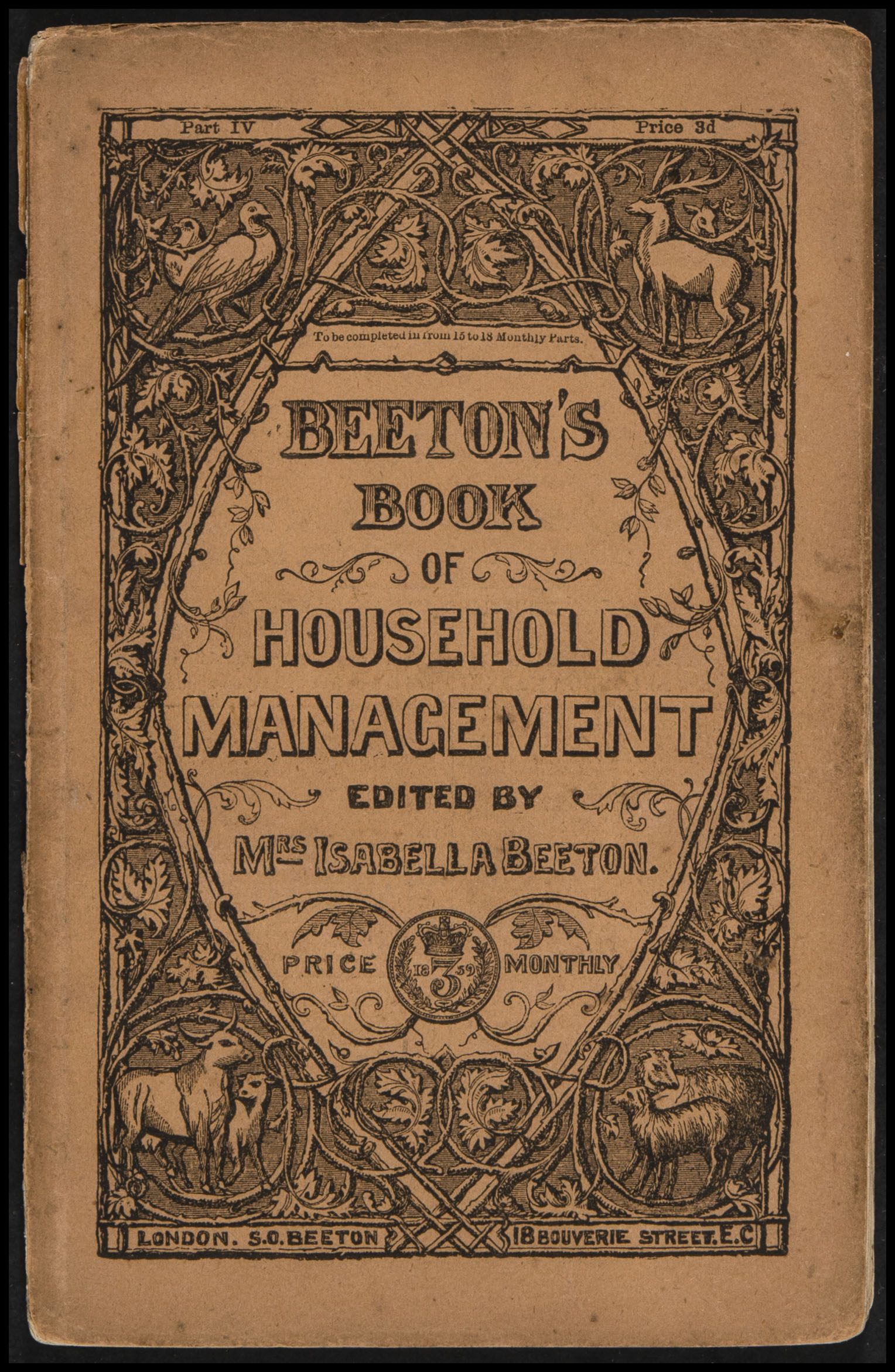 Over one hundred and fifty years since its first appearance in print, Mrs Beeton's Book of Household Management remains an archetypal text in the field of domestic and culinary arts, not simply for its extensive recipes and household management tips, but also for its creation of a persona of domestic excellence that persists, albeit in different guises, to this day. Through numerous re-editions, the Book of Household Management and the indomitable manufactured identity of "Mrs Beeton" has endured across three centuries.
Included within Food and Drink in History is a near-complete run of the monthly instalments in which this famed text first appeared. Printed from 1859 to 1861 by Beeton's husband Samuel Orchart Beeton, these instalments would go on to form the full volume that has become a staple presence in kitchens from the mid-nineteenth century onwards. Digitised from the University of California, San Diego, Mrs Beeton's Book of Household Management in its original form provides a revealing insight into the social, political and economic significance of food, dining, and the household in Victorian Britain.
Reflecting the growing middle-class ethos of self-help and individualism that pervaded this period, Mrs Beeton's first instalment primarily comprises advice on the role of the "Mistress" and "Housekeeper", followed by instructions on keeping a "good kitchen". For the Mistress, advice includes everything from dining etiquette to the treatment of servants, and from the choice of friends and fashion, to appropriate tradespeople. For the Housekeeper, "the second in Command in the House" (21), instructions are given on the keeping of household accounts, as well as the overseeing of all culinary enterprises and the ability to add the "finishing touch" to confectionery and desserts (22). The kitchen, as the "great laboratory of every household" (25), requires a good deal of space, light, fuel and water, as well as a kitchen range, utensils and weighing equipment – without such necessities "the cook must not be expected to ‘perform her office' in a satisfactory manner" (27).
Regimentation, structure and organisation are the stalwarts of this domestic ideal; something also reflected in the very presentation of these instalments. Hundreds of recipes are featured within the monthly parts, all organised into sections such as "Soups", "Fish", "Beef" and "Game". As many historians have noted, Beeton's text is significant as one of the first to clearly set out each recipe with a list of ingredients and specific measurements, followed by "mode", or method, and timings. Some recipes even include notes on the history or significance of a particular ingredient: the "Bengal recipe for making mango cheteny [sic]", for example, includes information on the garlic plant and its introduction to England in 1548, whilst "To Cure Tongues" includes a note on the biological and culinary uses of "tongues of animals".
Many of the key themes in Food and Drink in History are inherent in this rich publication, from food and identity to food and gender, economics, production, preparation and politics. To find out more about the history of Mrs Beeton's Book of Household Management, listen to Adventures in Gastronomy: Mrs Beeton's Cookbook or explore the contextual feature ‘Food Through Time: United Kingdom'.
Back Top
Privacy Policy Contact us Copyright Terms of use